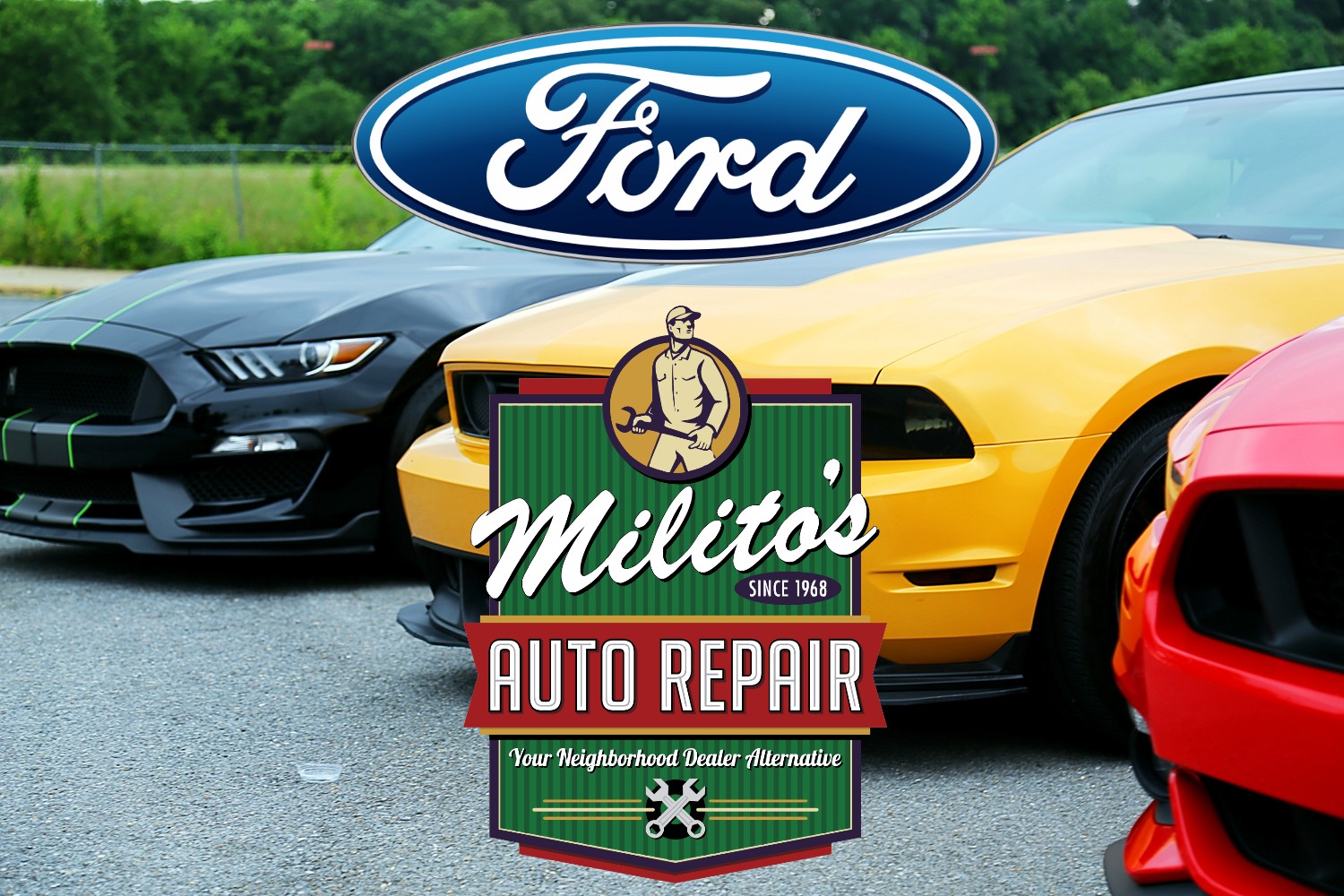 Milito’s has Taken Care of Ford® Owners Since 1968.

Rely on us for all types of repairs, service and maintenance today.

Inside, outside and under the hood, Milito’s has you covered from starting issues to brake replacement, heating and cooling problems to regular oil changes, plus car washes, detailing and full-service gas!

We can fix these issues, and any others that your Ford may have, plus perform the regular maintenance that your vehicle deserves!

Milito’s is here to first diagnose the problem

We’ve worked on all types of cars since 1968, and if there’s one thing we know, it’s to do your homework first. Our expert mechanics will thoroughly inspect and diagnose your Ford before any work begins.

Whether you have a restored 1969 Mustang Mach 1 or a 2019 Flex for the family, we can quickly figure out what’s wrong, and give you a clear estimate of what it will take to fix the issue.

Our expert Ford mechanics will then take care of the problem fast to get you back on the road in no time, confidently!

Call (773) 477-2289 or email us today for an appointment for any type of Ford repair, maintenance or service

Benefits of Getting Consistent Mechanical Check-Ups

If you don’t take good care of your vehicle, it won’t be there for you in the future.

While this means oil changes and tire rotations, it also entails having routine check-ups performed by our expert Ford service center at Milito’s Auto Repair in Chicago.

If you’re looking to sell your car at some point in the future, you’ll want to keep up with the routine service and maintenance needed for your Ford.

This will help to ensure that it continues to run in optimal condition. Selling it will not only be easier down the road, but much more profitable!

First, make sure your tire pressure is set to the right levels. This prevents your car from expending unnecessary energy and fuel while moving.

If your air filter is clogged or your fuel lines are leaking, your vehicle’s fuel economy can be negatively affected by up to 20%.

Interesting Facts, Figures and Resources for Ford Owners in Chicago

How Ford Has Stood The Test Of Time

Why People Love their Fords

Like their Detroit roots, Fords are tough. Enough so they boasted a slogan of “Built Ford Tough”. A long history of American industry has solidified Ford as a top automobile brand.

Why is Ford So Popular?

Boasting a large lineup ranging from transport vans and off-road vehicles to insanely fast muscle cars and eco-friendly electric hybrids, Ford has something for everyone. With so much to offer it’s no wonder so many have chosen the Ford brand.

What to Look for When Buying a Used Ford

A used Ford is an increasingly attractive option, with new models selling for ever-increasing prices.

If you are in the market for a pre-owned Ford, here are five things that you should do:

And they continue to focus on plug-in electric vehicles, pledging to invest $4.5 billion dollars to develop more of these vehicles by 2020.

They have also been using their innovations to improve conditions around the world. Ford began a 9 month program to improve pregnancy outcomes in rural India by helping nurses and mothers with transportation to and from hospitals.

The History of Ford

With $28,000 received from twelve investors, in 1903 Henry Ford converted a factory creating the Ford Motor Company.

Production on the Ford Model T began in 1908 and didn’t end until 1927 with a total world production of just shy 15.5 million.

By 1988, worldwide earnings had topped $5.3 billion for Ford, making it the highest of any car company to date.

Expanding their sales in China, they opened 88 dealerships in one day in 2014. More changes came in 2018 when they announced they plan to discontinue all passenger cars sold in North America.

Go Beyond Standard Service at Milito’s

From oil changes to wiper blades, Milito’s can keep your Ford driving smoothly down the Chicago streets, any time of the year (even in pothole season).

Stop by for regular maintenance, no appointment needed!

Whether you need standard repairs from regular wear, or have a more complex problem with your Ford, rely on Milito’s!

Our Ford Service Specialists will care for your vehicle like its their own. We can diagnose and repair any issue quickly!

Milito’s takes care of Chicago’s Fords, inside and out!